There are not many games in the thriller/horror genre that I would consider to be of any merit. The Silent Hill franchise, well the first two, and Dead Space were all I had thought were any good at creating that fear and tension deep inside your very being.

Alan Wake is a great addition to this genre. It plays with one of the more common fears that people have. The Darkness.

Alan Wake, who is a writer, is set in the fictional town of Bright Falls. 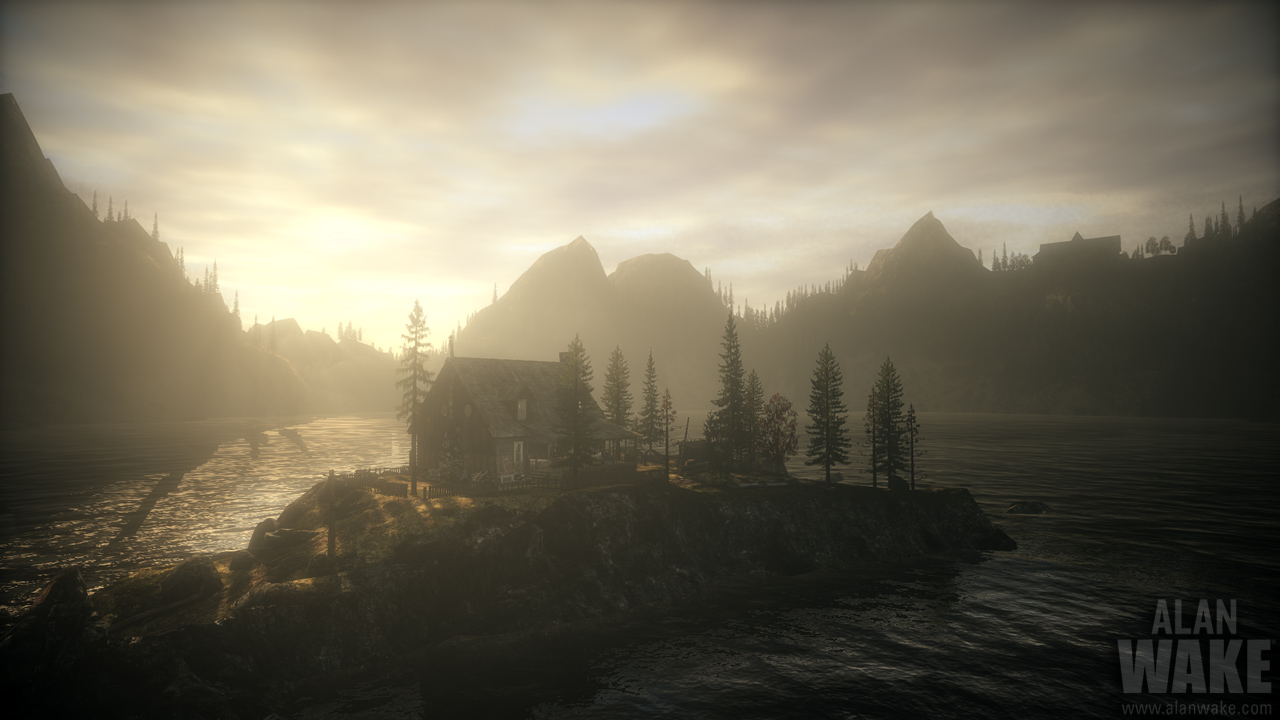 His wife has taken him to a cabin in the middle of a lake with the premise of helping him with his writers block. However it doesn’t take long for bad things to happen and when his wife disappears, the fun really starts.

The game is put together like an interactive TV series, being played out in episodes which start with a ‘previously on Alan Wake’ montage and end with a full music track by such artists as Roy Orbison, Nick Cave and the Bad Seeds and David Bowie.
Alan also talks as you control him and will pass comment on places or occurrences that he comes across, speaking as if from one of his novels.

As I mentioned before, the main antagonist is known as The Darkness.

It attacks by controlling various townsfolk by filling them with The Darkness and making them come after you with axes, knives and hand scythes. You can dodge these attacks if, no, when you become surrounded and there is a nice little slow-mo cinematic if you time it just right.

The only weapon you have against The Darkness is light. This is where the game really excels at ramping up the fear factor.
Using your torch, flare gun, flares or flash grenades you ‘burn’ away the darkness from your foe leaving them vulnerable to your trusty pistol, shotgun or hunting rifle.
Trust me; there is nothing scarier than walking in a blackened wood or deserted town with only a torch to light your way to really get those hairs on the back of your neck to stand straight up! 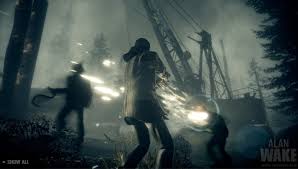 Sound also plays a big part by providing a suitably eerie tune or the sound of unseen footsteps. When played through my Turtle Beach headphones, every creaky door, rustling bush and invisible footstep immediately sends an icy shiver through my body, combine that with walking in the dark armed with only a torch and you have the full frightening experience.

If I had to come up with a criticism it would be the collectables, well the coffee thermos’ to be exact. They serve no purpose or seem to have any meaning that I can tell apart from giving you something else to do. The manuscript pages, however, I understand because they are closely related to the plot. As always though, being the completionist that I am, I have to collect everything regardless of purpose and meaning. Damn you Remedy Games! (only kidding, love you really!)

With a great story that bends and twists, amazing sound and incredibly scary atmosphere, Alan Wake is a game that every gaming fan should experience. Not many games can call itself a psychological thriller like a movie or a good book but Alan Wake sits right up there with Stephen King and the like.